Factions, Reputation, and Acquisition for Heresies Without Number 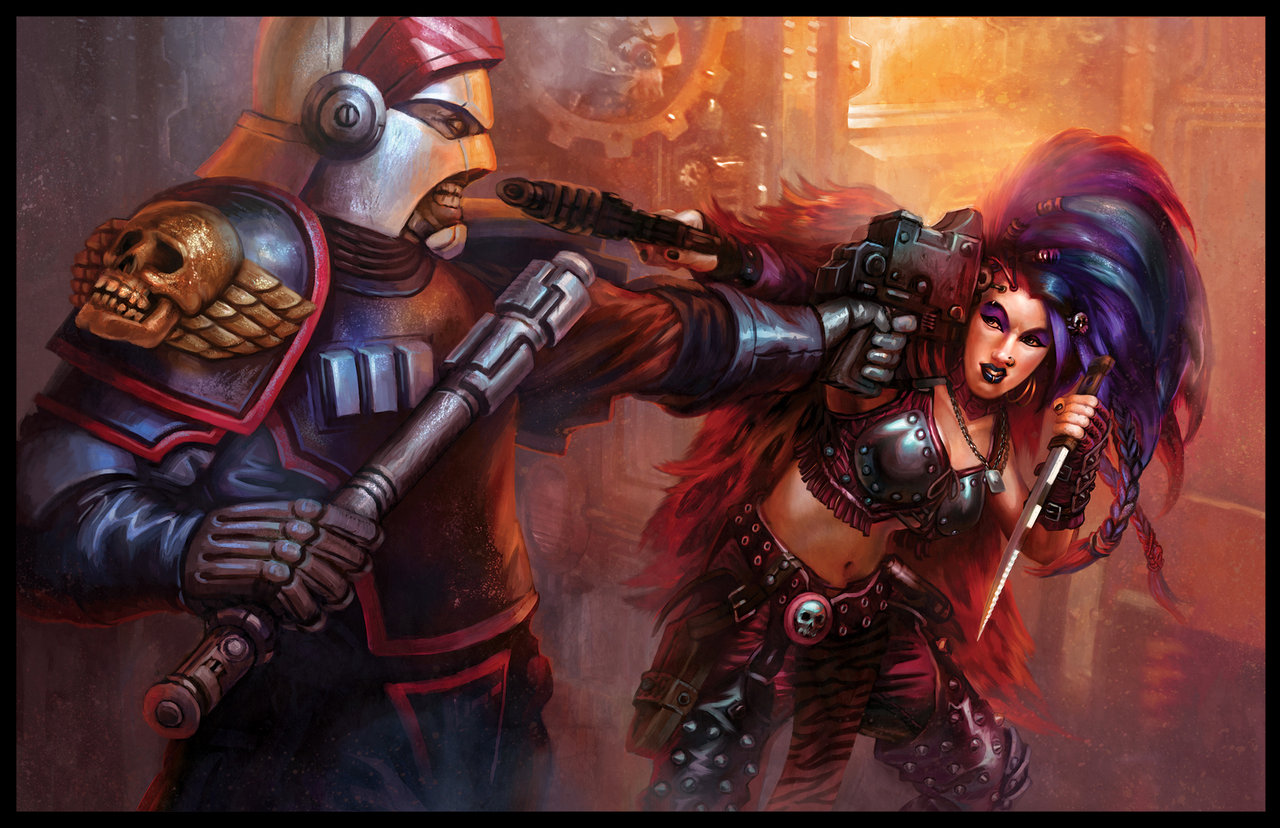 Taken together, these rules provide for running NPC factions and for players obtaining what they need from them. The faction rules are largely based on the Factions system in the main Stars Without Number rulebook, with a hearty injection from Gus L’s HMS Apollyon faction rules. The faction characteristics range from negative to positive numbers, with zero as average, to work with the acquisition rules, and the faction action and assets rules have been simplified to suit my own GM style. I think they should mesh pretty easily with the more detailed faction actions and assets in the SWN rulebook or elsewhere if that’s what you’re into.

The acquistion rules are a mash-up of stuff from FF’s Rogue Trader Profit Factor and Acquisition Rules, Gus L’s faction rules, and input from Google+. Thanks especially to Nick Peterson for the “add more dice” idea. For all of this, the original contributions from me are minimal.

The players’ acolytes can interact with a number of groups throughout their missions. If these groups are significant enough that the players may ask them for significant help, or if they will interact with other groups in the sector, then they can be given stats and tracked as factions. Crucially, the acolytes’ patron Inquisitor is tracked as a faction.

Factions have the following characteristics: Force, Cunning, and Wealth.
Characteristics can range from -4 to +4: -4 represents extremely weak or no ability in that area, 0 is about average, and +4  is extremely capable, usually sector-spanning capability, in that regard. For reputation, -4 is an active and extreme hostility to the acolytes, while +4 is fervent, motivated support.

Force
Force represents a faction’s ability to commit violence and intimidation. A chamber of commerce might have a force of -4, a local powerful gang would have 0, and an Imperial Guard regiment +4.

Cunning
Cunning is how good the faction is at acquiring and retaining secret knowledge, whether through espionage, lorekeeping, or contact with forbidden sources. The warrior elite of a backwater world might have a -4, a planetary governor might have 0, and an inquisitor lord or powerful sorcerer might have +4.

Wealth
Wealth shows a factions ability to acquire, manipulate, and use money to achieve its ends. A penitent sect of redemptionists might have -4, a hive-wide merchant guild a 0, and the scion of an ancient and powerful Rogue Trader dynasty might have +4.

Tags do not have a score like characteristics, and instead are primarily descriptive in nature. They are there to aid the GM in remembering the kinds of things that they will be good and bad at, and what their motivations might be. If a tag is especially relevant to a player “ask” however (see section on acquisition), the number of dice rolled might be modified up or down by one, if that tag makes it especially unlikely or likely, respectively, that the faction can make good on what the acolytes want.

While tags will provide the general shape of the sort of things a faction wants to obtain or can provide to the acolytes, the GM may find it useful to record specific things that a faction wants or can provide in order to foster adventure hooks and rivalry with other factions beyond those inherent in their type. For example, while the relationship between and Inquisitor and a Chaos Cult might seem straight forward from their tags, the introduction of things that one can provide that the other wants creates more opportunities for intrigue and conflict.

Reputation represents how well a given faction knows and likes the acolytes. It is a collective attribute for the party of acolytes as a whole. It is primarily gained by performing missions on behalf of or turning over useful materials to different factions.

While it would certainly be possible to play a game where each character has his or her own reputation with various factions, the default assumption here is to treat the team of acolytes as a unified whole, so as to place the emphasis on them as a cohesive unit amongst the intrigues of other entities, rather than to encourage inter-player character rivalry or intrigue. If a game with more scope for potential intrigue among the player characters, or even where it is simply deemed more interesting for each character to bring different allies to the table for the team to benefit from, then track reputation for each player character separately. In this case, players should track their reputation with factions, rather than expecting the GM to record each player’s reputation with every faction.

Gaining Reputation
Some factions will have specific activities or goods that will allow the acolytes to gain reputation with them, but there are also some that are common to almost all factions.

Limits on Reputation
Some factions will have inherent limits placed on the amount of reputation the acolytes can gain. For example, an alien faction will only trust human acolytes so far, and the Tech Priests will never admit outsiders to their closest confidences. In these cases, reputation will be capped.

Some factions may require the acolytes to renounce ties to certain other factions in order to advance past a certain point. An initiatory cult may allow anyone to learn a few minor things, but require people to renounce ties to other religions in a demonstrable way before granting more reputation.

Allied Factions
It is possible for the acolytes to gain “unearned” reputation with factions that are strongly allied with a faction with which the acolytes have an existing reputation. Obviously, the new faction must know of the association for these benefits to manifest. For example, the players might gain “automatic” reputation with an Imperial Guard regiment that has worked for their patron Inquisitor before, but only if the regimental leadership know that they work for the Inquisitor.

In these cases, the “free” reputation should usually be about half of the “earned” reputation with the primary faction, but the GM will decide what is appropriate based on circumstances.

Spending Reputation
Reputation may be “spent” in lieu of making acquisition checks. Spending reputation covers more serious favors, such as lending direct faction aid to the acolytes in dangerous situations. The most common example is obtaining faction members as allies or troops for a mission.

Reputation can also be spent in lieu of an acquisition roll for more normal asks. This represents the acolytes calling in some favors and burning some bridges to get a greater benefit now at the cost of future assistance. Generally, each spent reputation point should allow for automatically passing an acquisition test at that scale. For example, spending three reputation points would allow for an automatically successful scale 3 acquisition test. This rule can be modified by the GM given particular circumstances.

Note that by combining reputation spent with reputation rewards for completing missions, reputation can effectively be “lent” and paid back at interest. The acolytes could pay the Imperial Navy 3 reputation points for the use of a cruiser and its crew, and then use it in a mission the Navy wants accomplished that would be worth 4 reputation.

Reaction Rolls
When the acolytes enter a new interaction with a faction, reaction rolls should me made just as with NPCs. Reputation modifies reaction rolls with the faction as if reputation were the group’s fellowship (i.e. use the attribute modifiers: - 3 or less = -3, 4-5 = -2, 7-8 = -1, etc).

Players will often want to use their contacts in factions to obtain help in completing their missions. This may take the form of physical equipment, favors, services, knowledge, or anything else the acolytes may need that a faction might provide. Most small things can be handled through roleplaying or GM judgment, but when the players want something that would entail significant effort, cost, or risk, then it should be treated as an “ask”. Acquisitions are primarily meant to handle “off screen” faction activity, so if the acolytes will be directly and actively involved in making it happen, it should instead be treated as a mission with assistance from the faction, and played out normally.

The Ask procedure is detailed in the Acquisition section, but is summarized here:

Acolytes will not normally be required to conduct their missions with their own funds, nor will seeking out loot to enrich themselves be a primary motivator. Instead, their Inquisitor or other interested factions will provide resources and influence based on a combination of their own capability and how willing they are to use it on behalf of the acolytes.

Reputation, covered in the Factions and Reputation section, is the primary tool for the acolytes to obtain goods, services, and help from factions, including their own patron Inquisitor. Reputation serves as the target number in Acquisition Checks, detailed below.

Whenever the acolytes need to acquire gear, obtain favors, or get a faction to exert influence on their behalf, they make an acquisition check. The players tell the GM what they want to acquire and from what faction they are asking for it, and they GM will tell them the rarity and difficulty of the ask.

The basic procedure for an acquisition check is as follows:

2. Roll Faction Reaction
Once the faction is contacted, make a reaction roll as normal for NPCs, but use the acolytes’ reputation rather than any individual acolytes’ Fellowship to modify the roll.

A reaction of “neutral” or better is required for the faction to even listen to the players’ ask, and the GM should take better reactions into account when determining the modifiers to the acquisition roll.

The acolytes’ reputation is treated as a character attribute for the purposes of this test, and follows the basic attribute modifier scale:

3. Determine Scale of Ask
The scale of the desired acquisition represents its rarity or the degree to which it is “a Big Deal”. With gear, items will have a default rarity listed, though this can be modified based on the faction in question and the situation (Tech Priests on Mars will have much easier access to advanced tech than those on a remote technological dig, while either will probably have easier access than a local king on a Feudal planet). Each level of scale/rarity forces the acquisition check to use an additional D10.

As a general guideline, use the following tiers:

4. Determine Modifiers to Ask
Different factions can more easily obtain different things. The most common resources asked for from factions are covered by their characteristics - Force, Cunning, and Wealth. By default, apply the relevant characteristic a a modifier to the roll. Other situational modifiers may applied by the GM as well, such as a positive modifier to acquire something that will directly aid a mission benefiting the faction, or a negative modifier if the acolytes have been leaning on this faction for a lot of support recently, and such like. Modifiers should usually be capped at no more than +/- 8.

5. Roll Against Reputation
Finally, the actual acquisition check determines the success or failure of the players’ ask. One player should roll for the group:


If the acquisition roll is fumbled (all 1’s), the players lose a number of reputation equal to the scale of the ask, as they have either offended the faction or something has gone horribly wrong in trying to obtain what they want and the faction blames them.
Posted by Jeff Russell