Weapon Characteristics, Ammo, and Bleeding Out for Heresies Without Number 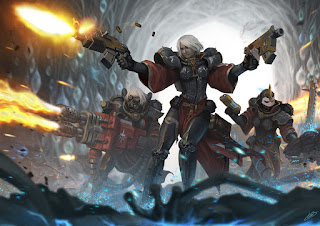 In the spirit of posting things as they come up, rather than waiting until something is "done" and taking forever, here's a few  rules that came up at the table last night, plus a few more, for Heresies Without Number.

Flame: Flame weapons have the chance to set targets on fire. Damage is rolled as usual, but if the result is in the upper half of the damage die (e.g. 5-8 on a d8), then the target is set on fire and continues to burn. On the attacking character's next initiative turn, roll one die size smaller damage. Again, if damage is in the upper half of the die, the target continues to burn. If not, the flames go out. After rolling d4 damage, the flame goes out regardless. A burning character can forego all action for a round to stop, drop and roll, but may require a Willpower check to avoid running around in a panic.

Blast: Blast weapons do not roll to hit as usual. Instead, any potentially affected targets must make a dexterity save (roll equal to or under dexterity, assume Dexterity 10 for characters or creatures without a listed score) or else be hit. The number of potentially affected targets will vary with the type of weapon, but generally 3-4 human sized characters in relatively close proximity may be affected - fewer for smaller weapons, more for larger. (This and autofire owe their existence to Gus L at Dungeon of Signs here)

Shock: Shock weapons are designed to stun and subdue more than kill. As such, they do their listed damage (typically d10) against Guts only. A target reduced to 0 guts by a shock weapon is knocked unconscious, but is otherwise uninjured. Shock weapons do the damage in parentheses (usually d6) when used as standard weapons, in which case they are able to affect Blood and cause injuries as usual. To keep things simple, only one "mode" can be used at a time - users of shock weapons strike differently to stun versus wound, and using them as crude clubs doesn't allow the shocking machinery to work properly.

Power: Power weapons are exceedingly good at piercing armor. Ignore AC from armor when attacking with Power weapons (only count AC bonuses from Dexterity). For monsters where it is unclear where their AC comes from, the referee will just have to make a judgement call. Some creatures (like demons) will be immune to this effect.

Plasma: Plasma weapons have a chance to overheat and injure their users. Any time a Plasma user rolls an 18 or higher to hit, he takes half normal damage for the weapon.

Autofire: Autofire weapons have the option to exhaust all ammo in order to function as a blast weapon for a round. Follow the general guidelines for targeting, but larger magazine weapons will be able to target more characters (an autopistol might be able to hit one or two potential targets, while an assault cannon can probably hit 6 or 7  if they're close enough together). (Again, see here)

Chain: In the grim darkness of the far future, just about everything has been turned into a chainsaw. Chain weapons grant no special rules in combat, but they are extremely loud and they can be used to cut through most inanimate objects with some effort. Doors, crates, support beams - encourage chain weapon users to think about how their environment could be less put together than it is now. And make sure they attract a lot of attention.

Until I decide otherwise, I'm using the Cascading Dice thing from James at Ten Foot Polemic here . Each weapon has an ammo die. You roll that die whenever you fire it. If it comes up a "1" step down a die size. Once a d4 comes up a "1", you're out of ammo. Topping off ammo restores it to its default die type. Maybe carrying around loads and loads of ammo gives you a pass on your first "1".

Bleeding Out and Dying

Characters that are bleeding out (a result on the injury table) are helpless to act. Each round, they must make a Toughness save (a "Death Save"). After three successful saves, the character is stabilized and in the clear. After three failed saves, the character dies. Any attacks that hit cause an automatic failed save. First aid grants an automatic passed save. Attacks that would obviously finish the character off do so (so no, that Ork doesn't have to shoot you in the head three times when he's standing over your unconscious body).

First Aid in combat takes an entire round and is treated as an easy skill check (target 6). Anyone can attempt it, but specific skills improve the roll as usual, and using emergency medical supplies provides an automatic success. Successful first aid grants a bleeding out character a successful Death Save.
Posted by Jeff Russell