+Zak Smith had the awesome idea to take Noism's brief setting and add to it, then pass it along. So here's a few additions from me in Green Helvetica.

I  stole this county full of D&Dables from Noisms. I've subtracted nothing but have added some bits to it in courier below.

If you like it, I encourage you to now steal it from me and append some more stuff to it in some other font and publish it on your own blog. In a week or two or a few weeks we might have a nicely fleshed-out place. 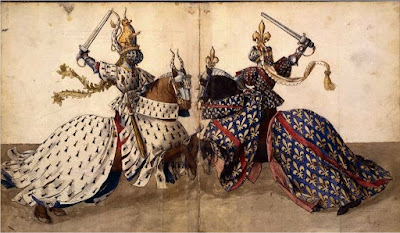 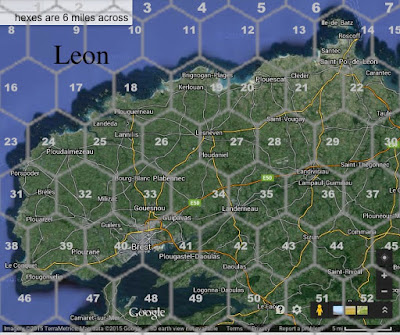 Count of Leon and family.

Ibn Al-Aziz - An Ogre Magi from the Sheikhdom of Catalyud, now a powerful merchant who owns five vessels, with lots of 'shady' contactsand a symbiotic eye still connected to his sister (an ogre witch) overseas.

A wizard living in a lighthouse on the edge of town - advisor to the Count and ambiguous ally. The light is actually a hive of fireflies upon which the wizard experiments.

Circle of druids - headquarters somewhere in the forest, occasionally come to Brest. They gather information with the help of their owls.

Wizards Tower - lighthouse, on the rocks on the outside of Brest (Hex 40)
Ibn's Mansion - also on the outside of town, but on the inland side. Built in an exotic foreign style, unwelcome visitors find the place a maze that continually leads back to the room they entered.(40)
The Castle - where the Count calls home. Built on the site of a Roman provincial headquarters, the catacombs underneath are extensive.(40)
Old Monastery - housing a library (& Juliette)(40)
Smuggler's Caves -  ancient cave system, now abandoned - except for monsters - and the smugglers' hoard? The smugglers remain, as skeletal undead. The actual complex somewhat resembles the layout and content Disney's Pirates of the Carribean ride with the revenant creatures still playing out dramas from past lives.(Hex 20) 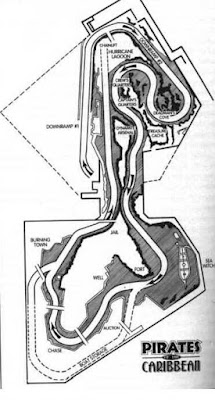 Meriadoc's Tomb - burial place of the semi-mythic founder of Brittany, watched over by an order of clerics. The tomb and the clerics' weapons are made of an eerily dense metal.(Hex 14)
Conomor's Tomb - burial place of an ancient king, now haunted. It is in a swamp--the ghosts are not that of the king, but of his many lovers and victims. A lich is entombed in a bog nearby.
Tower of Erispoe - once owned by a now extinct noble line, reknowned for the eccentricity. Glass cages are built into the walls, housing exotic reptiles.
Giant's Cave - not apparently inhabited by a giant, but a clan of ogres. The locals suspect they are connected to the merchant Ibn Al-Aziz but they despise the foreigner.(Hex 49)
Oessant - island, uninhabited but excellent shelter for raiders. Contains two hidden objects--one blessed, one cursed.(West of Hex 31)
Witch's Hovel - home of an enchantress. Her features are ever changing--her head bloats into a morbid caricature at whatever woman is most powerful in the county at the time. (Hex 27)
Castle of Mauclerc - ruined castle, magic treasure inside?There is, but it's in the belly of one of the creatures (or pigs) inside. The wild pigs migrate to and from the castle by a natural causeway exposed at low tide.(Hex 14)

·       One of Ibn's ships has gone missing and he's certain it's the wreckers in Plogoff, who have caused him trouble before. (It's actually the ogres of the Giant's Cave, but the wreckers are PC-level troublesome dicks--and have treasure. Plogoff is on the coast south of Leon)
·       Juliette de Fevers wants bodyguards to visit the witch with her. They will be alarmed to discover the witch currently wears Juliette's features--because Juliette is sitting on a terrible secret about the Count.
·       A band of gnolls are causing trouble around Morlaix.Their leader communes with the bog lich. (Hex 30)
·       Pirates spotted around Oessant. They are actually Spanish privateers, including the daughter of a powerful Venetian. Foiling them could result in a full-scale international incident.
·       Druids concerned about a troll. The troll has pustules which burst when struck, expelling poison.
. Pigs are being born with scales like fish.
. The Baron of Douarnenez is rumoured to be negotiating for the return of his food taster from bandits holding him hostage.

.  Skeleton warriors around Conomor's Tomb. The bog lich sent them to retrieve an artifact buried with the king which will bring the lich back to life.