Every Version of D&D Part III: Monsters and Treasure 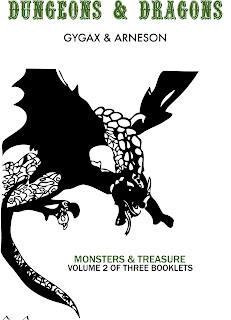 Okay, so I’ve been writing other stuff for awhile now, and I’ve been neglectful of this little series of naked hubris.  So back to it with Monsters and Treasure, Volume 2 of OD&D.

The table that opens the book displays its wargame roots to me.  Monsters are presented here as a list, rather than as encyclopedia type entries that you see in the Monster Manual and onwards.  The former suggests a selection from which to choose, while the latter suggests reference material for something you've already chosen.  The entries look to be sorted roughly by category (undead are together, mean humanoids are together, foresty/fae type guys are together, et cetera).  It would have been handy for these to have been called out specifically, like we see in later “encounter by terrain” type tables, but the thought was already there. Finally, you’ve gotta admire the brevity of the “stat block” given.  It even makes S&W’s justly praised concise stats seem extensive.

Again we see some assumptions that you’re familiar with Chainmail if you’re bothering to buy this game.  I have to wonder how much of this was just  carry over from the document starting out as “the fantasy supplement” to Chainmail that was never changed, and how much was because they assumed people buying this new product (D&D) would already be Chainmail fans (or was it a subtle way to try to “push” Chainmail?).

And as we get into the actual monster descriptions, there are a few things I find interesting: men are given an extensive treatment compared to their treatment as “monsters” in later editions.  I think this is partly because later editions figure “we already told you how to make characters and NPCs, you can just do that for bad guys”, but I think it also reveals a preference for humans as the “default” opponent that was worn away in favor of monsters and humanoids in later versions.  It makes sense, considering the game started as “medieval battles (all humans) + monsters”.

As we get into actual monsters, the brief descriptions focus entirely on “tactical” considerations, even if they are flavorful (“will attack dwarves on sight” and so on).  There are some interesting implicit “setting” details that come out, such as detailing goblin kings and that there are varied tribes of orcs, some in villages, some in caves.  Gnolls and Trolls get a little bit of pure flavor text.

The tradition of giving Dragons one of the most extended entries starts early and starts strong (they are in the title, after all).  The “attack/damage modifier by element type” table is interesting, I had forgotten it was there.  Are these retained in later versions, just spelled out on a by dragon basis? It’s kind of cool seeing it as a “system” of sorts.  Oh, and the “subduing dragons” section is one of my favorites from OD&D.  When I first found it, I couldn’t believe they had such specific rules spelled out for dragons only.  This rule just screams “made up for a very specific event in play that became common place” rather than made up to be complete or to cover everything.  It’s also interesting that the dragons choice of attack is shown as being diced for, rather than decided by the referee. 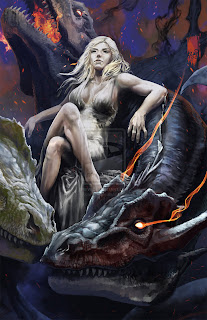 Well, that's one way to subdue a dragon

Overall, for such a tiny booklet, it is surprising to me how complete the monster list is.  So many monsters that became staples of D&D are right there.  It’s pretty admirable, really.  Sure, the AD&D 2E Monstrous Manual was probably the very first gaming book I ever bought from a store (the PHB I got from a friend), and it is a lovely and inspirational book, but as with the rest of OD&D, the terse entries presuppose that I can handle detailing stuff and making it interesting myself, and just give me some help on the stats.

Now, as for the Treasure section, I’ve gotta say, the tables make my eyes cross a little bit.  I’m sure there’s all sorts of interesting stuff to be gleaned by examining the probabilities of different outcomes, and I’m sure it supports the whole “dice tell you what the world is like” mindset that I find it useful to cultivate as a referee, but I can’t perform that analysis right now.  My own preferences for rare magic items have led me to using other systems, though perhaps I should re-evaluate the assumptions in the tables about rate of reward to challenge, since I feel like I’ve gotten off on that in my own game.

The magic sword section is pleasingly detailed and insane.  It’s pretty obvious that Gygax and Arneson (or their friends) had Stormbringer in mind for a lot of the design here.  It’s also surprising that magic swords get so much treatment when they’re not super rare by the treasure tables (I think; again, no in-depth analysis here).  Perhaps this was an early attempt at a solution to “but what makes fighters special as they level up?” Though the Egoism rules suggest an attempt at also building in “but how to keep low level fighters from getting too powerful too quick by one lucky treasure break”. That’s a problem I’m facing right now in my game, so it wouldn’t surprise me if it’s been there from the get go at least for some folks.

With the magic items, there is a similar familiarity as seen with monsters, but in this case it is less pleasing to me.  This list gives the impression of “here’s some wacky stuff we thought up either because it would be fun/weird, because it was in a story we read, or because it came up in play that it would make sense.” Or at least, that's how the list comes across if I force myself not to read it as “standard D&D magic items”.  Because all of these became the assumed default magic items, and time changed them from a list of examples to a list of assumptions to a list of guarantees. 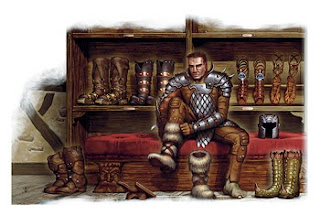 Ye Olde Magical Boot Shoppe.  What is this, Diagon Alley?

Copper coins are worth a little more, 1/50th gold, rather than 1/500th.  Interesting.  Oh, and I’ve been doing some research for encumbrance rules, and it turns out that 10 coins to the pound isn’t that crazy – for silver.  Gold coins were way lighter than silver coins, because the metal was worth so much more, people made much smaller, thinner coins.  I’m finding the “silver standard” of games like LotFP to make more and more sense.  Plus it adds the chance to make the default coin the heaviest and hardest to transport, hah!

Well, that was pretty rambly.  Next up we’ll conclude the original White Box with “The Underworld and Wilderness Adventures”, with the Supplements to follow (I may jam them all into one less detailed entry).

Email ThisBlogThis!Share to TwitterShare to FacebookShare to Pinterest
Labels: Damp;D, Every Version of Damp;D, OSR, Projects