Research, research, research.  This session was pretty much entirely the players using the library in the Fyrberg temple to try to find out more about the history of Gurgu, Gurguism, and the complex in the mountain.  It dragged a little, as everyone was researching different stuff, and I had to narrate results of their researches to each person individually.  Also, describing what you’ve read in ancient texts isn’t always the most interesting experience.  But overall I think the players got some useful info, overlooked some useful stuff as unimportant, and came up with some sharp observations on the improved information they found. 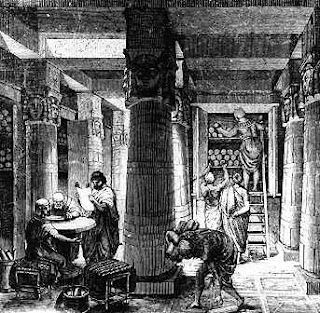 But with more clay tablets

During their researching, they found that a wizard (they still haven’t found his name) became obsessed with immortality (nothing new there) and that he decided the elemental power of fire was the key to it.  Hence his volcano lair.  Yllgrad the dwarf found a number of dwarven texts giving more information on Fellhold, as well as the excavation and waterworks of Fyrberg.  The players discovered that the ornate summoning circles in the floor in sections of the temple allow people with little to no magical ability to summon elemental beings, but that such circles only work in nodes closely connected to an elemental plane (like a volcano, an oceanic trench, deep in a mountain, et cetera).  This wizard kind of glossed over all of the non-fire ones. He also had researched extensively binding elemental forces into physical objects in his quest for extended life.

As to the religion of Gurgu (these writings were more recent, and therefore in a language that everyone could read, not just the hyper-literate Bryni), they found out a few things.  They discovered that the original prophet of Gurgu was a man named Nar, and that he preached all the stuff the party has already come to know about Gurgu (cleanse the mind, body, and spirit, the fires of the world are the primordial life force, et cetera).  They discovered that he was denounced by a man named Klog, finding both an anti-Gurgu screed by Klog and a religious document detailing their conflict.  The screed claimed that Gurgu was a dumb elemental and that Nar was a fake.  The religious text claimed that Klog was a wicked man who refused to accept the knowledge and power of Gurgu and tried to kill Nar in his jealousy.  But Nar summoned Gurgu’s avatar, who cast Klog into the Fyrberg, where his spirit could be cleansed and become one with the fires of Gurgu, despite his unbelief.

Other than the research, Sir Varian decided to throw the town a victory feast, and somehow in the celebration (thanks to Jeff Rients’ excellent carousing table) he ended up getting inducted into the priesthood of Gurgu.  Not just a member of the church like the others, but an actual initiate.  We’ll see how that shakes out.  The rest of the group is starting to suspect that Gurgu might not be a god at all, but just a big lava elemental.  They’re debating how and if to reveal it to his followers to disabuse them of their false ways, and afterwards either returning to Mickleheim or taking advantage of the extension they purchased from their ship’s captains to go check out some mysterious coastal ruins. 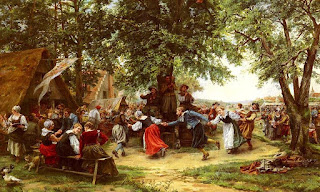 Other than that, after the game we discussed adding some more games to our rotation once we reach a good stopping point.  I’ve been itching to be a player in something, but I wanted to make sure we got some of the slow burn enjoyment out of an ongoing campaign.  Hopefully a rotation will allow each game to be enjoyed maximally.

Some Further Optional Library Rules
You should probably start with the library rules found in the Vornheim Complete City Kit because they are awesome.

But if you've, say, sorted your library into topics and the players are trying to find out about specific subjects that the library has a reasonable chance of covering, then use the following rules to supplement:

1) Anything that can reasonably be found with enough time and effort that the players can read, just tell them.  D&D probably doesn't need to be about complex research.
2) That being said, if time and/or effort are limited, if some characters have more ability than others, or if information within the library might be hidden or obscure, do the following:
- Pick a period of time based on the size and complexity of the library or physical area being searched
- Each player searching for that time period rolls 1d20 per language applicable to that section that they know. Consider adding another die if the character has established they are particularly good at scholarly pursuits or if they are a magic user
- If they roll equal to or under their intelligence, they learn something useful.  Consider adjusting how useful based on how much they pass the test by, but keep in mind point 1) above.
- Make sure to take into account any smart strategies the players come up with to maximize success.  The only reason we're rolling for stuff is if it's interesting to have a chance of using up resources and making meaningful decisions.
3) If a player passes an intelligence test, but they specified they were looking into stuff not relevant to the overall purpose, then make sure they find something potentially useful or interesting that would make sense to be in this library
4) If the library contains any spellbooks or scrolls and is searched by someone who could know, like a magic user, and they specify that's what they're looking for, follow the procedure above, and then determine the number and composition of spells.  If you don't have anything specific in mind, roll 1d6 for level and the closest die size for number of spells in a spell level to randomly determine spells.
Posted by Jeff Russell