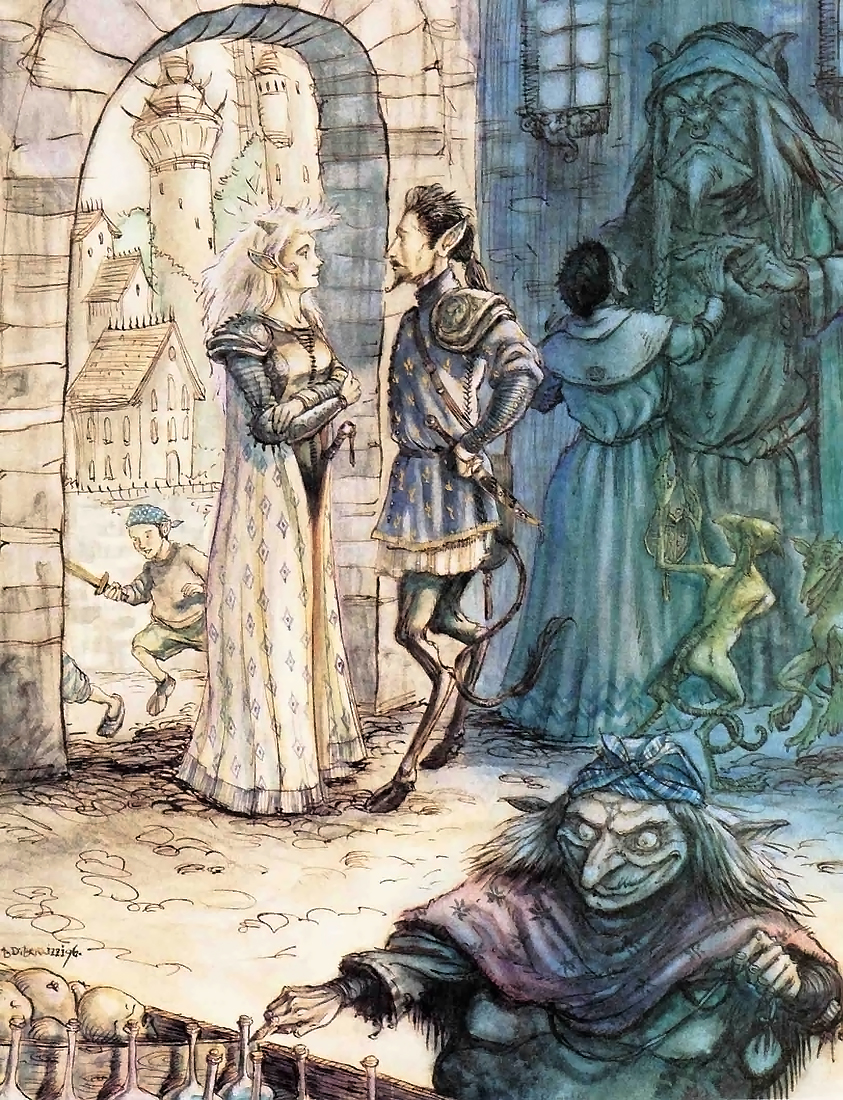 Today we continue with some more Fellhold Reboot content - in this case a couple of random encounter tables. There's reference to some district and faction encounters - those are still under developed. The first here is a list of situations you could find your contacts in when you go to find them or bump into them on the street. It's part of a series of rules I'm putting together to try to enhance the role contacts play for players in the game.

The second is a "generic" encounter table, meaning it's not linked to a particular district or faction - you can encounter these anywhere in the city, ruined or inhabited, friendly or hostile. Hopefully it gives a view of the weird "normal" life of Fellhold. I'm not really doing any new with the formatting or application of these tables, so the main "hard problem" I'm trying to solve here is getting the aesthetics right - I have a very strong but vague idea of what I want Fellhold to "feel" like, but I don't know how to inject that into other people's brains. These tables are a start at trying to figure it out.

I've taken inspiration from Arnold K's post here, where he encourages randomer random tables - the goal is not verismilitude so much as it is creating something interesting and imagination provoking that gives the referee and the players levers to pull and tools to exploit. If I start playtesting these more and find out that a walk down the street is bonkers crazy in a not-fun way, then maybe I'll adjust some.

By the way, let me apologize for the terribly formatted table below - I know InDesign, but web layout is not my strong suit.

5 Contact Encounter
Randomly determine a contact from a randomly determined PC, or else select one that makes the most sense given where the PCs are and what they’re doing. Use the table below to determine what situation they find their contact in. Some referee discretion, as always, may be called for - if the encounter occurs in an overtly hostile part of Fellhold, some of the situations below may not apply, or may apply in a modified way.

1) Dead
2) Fighting desperately with a district encounter
3) Fleeing from something, they press a small package into the PC’s hands
4) Running from watchmen
5) Deep in conversation with someone from a faction hostile to the PC
6) Chatting up an attractive young person
7) Buying something
8) Deep in conversation with someone from one of the PC’s factions
9) Stumbling around disoriented and confused- are they drunk? Or something else?
10) On their way to a broker to act on a sweet tip for the soul market
11) Supervising moving a large amount of material relevant to their career
12) Standing in the middle of the road with a shocked look on their face
13) Examining a structure with great interest
14) Moving furtively, trying to hide their appearance
15) Doing something that seems remarkably out of character, opposite their usual character in fact
16) Wild eyes, crazy hair, frantic
17) Whistling happily, largely oblivious to their surroundings
18) Eating or drinking something
19) In a furious shouting match with someone, possibly about to come to blows
20) Passed out in the gutter

6 Generic Encounter
The generic Fellhold encounters table may be used just about anywhere in Fellhold if a more a specific encounter is not available or desired. If a more “mundane” encounter is desired, simply use the contact generation rules and the contact encounter table, but assume that the person so generated is a stranger to the PCs unless otherwise indicated. As always, make use of reaction rolls and interpret in light of the district’s status of friendly, neutral, or hostile. Modify as appropriate to the situation - if the characters are deep in an abandoned dwarven hall, they are unlikely to encounter a wealthy merchant, and if they do, it is likely to be a far different circumstance than bumping into him in the market. The default assumption is that each entry will be encountered alone unless otherwise indicated, but if you like you may generate d3 or d6 of a type if it makes more sense. If needed, consult the random faction table to assign the encounter a faction. As always, use only those columns that make sense and are necessary. Likewise, feel free to ignore any results that don’t fit the situation.

Generic Fellhold Encounters
When no more specific encounter table is applicable, this encounter table may be used. This table may also be used to generate slightly more “exotic” NPCs than the default NPC generation chart for use outside of random encounters.

As usual, this table may be used either by rolling once and reading straight across, or rolling for each column separately. If an entry refers to another encounter, you may roll again or simply use the next line if speed is desired. Note that as with the NPC table, the columns proceed in roughly the order of most obvious to least obvious, so that you may roll only on those columns necessary, if desired. Location may be ignored if the placement of the encounter has already been determined.