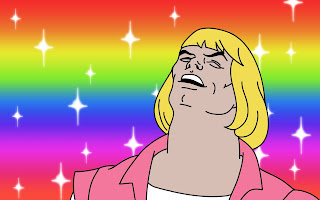 So, after being shamed by the accurate description at Charles Akin's Great Blog Roll Call of my posting habits (ridiculously infrequent), I've decided to put up a quick post with some thoughts from a recent Google+ conversation, and to work on my concision to boot.

I solicited some ideas about how much damage higher-level fighters should do in older types of D&D.  In OD&D and the various flavors of Basic-derived D&D, fighters don't really get a bunch of attacks or damage bonuses beyond whatever they start with (okay, except against 1HD foes). This is a problem for one of my players, probably because his character is currently facing off against a Lava Golem worshiped as a god, and it has a fat stack of hit points.

I'm torn.  On the one hand, the exact thing I was thinking when I statted up this bad boy was that A) previous attempts at "tough" monsters were a cakewalk, and B) a slug fest would probably not be the most effective tactic.  So it has excellent AC and buckets of hit points, but some vulnerabilities both combat-wise and fictionally (I don't want to go into it in case any of my players read this - the fight is still going).  Also, more generally, I like the idea that fighters are really good at killing people and people-like things, but they aren't super-powered death machines.

On the other hand, fighting is the one schtick fighters get.  If their ability to fight doesn't change as the challenges they face do, they might end up bringing nothing mechanical to the table.  It's all well and good to put the focus on player creativity, shenanigans, and operating at different scales, but if those are options available to all classes and those classes also can cast spells, then that sucks for fighter players.  So I have some sympathy for the idea that no matter how badass you get at hitting, at some point maxing out at 8-10 damage per round is going to limit your effectiveness.

I still haven't decided, but in the meantime, here are some suggestions from the Googlesphere, put here so I can find them later (if the authors take issue with me sharing their thoughts or linking to their G+ profile, let me know and I'll take it down):

"I can't say I've actually done it, but I think that is the direction I would lean. Without using a table or simply doing a multiplier of the damage, I might consider doing something that fits the fiction of the deed die the player used. No fiction, no extra damage. With fiction, you could damage a sword arm or something more specific to whatever fiction the player described. Could add some dynamic aspects to the combat.﻿"

And Dave Dunaway has a pretty creative solution:
"One idea I'm kicking around in my head is to have fighter's weapons get a small chance of acquiring the powers of the monster's it kills. So, after killing a dragon there's a possibility that it gains a bonus to hit or damage or gets a flame or acid effect. In theory, this allows the weapon to "gain levels" along side the fighter and increase damage organically as they acquire experience.
At the same time, I'd hope that this makes the sword's lineage and history more important. Aragorn's sword wasn't cool because is was a +2 longsword (although it may have been), but because it has a story behind it.﻿"
Posted by Jeff Russell