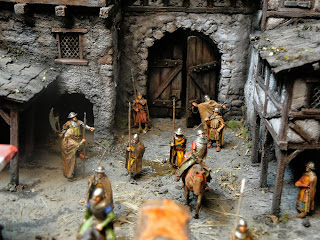 This is going to be a pretty short post because I'll be spending Christmas Eve hosting the family.  But I want to keep up with this blogging regularly thing, so let's press on with the Middenheim series!

I really like Zak S's Contacts rules from Vornheim, and unfortunately, urban play hasn't been a big enough factor in my own campaign to make much use of them yet.  This variation is meant to reinforce a little further the different feels of the different districts by tying NPCs to the district they live and/or work in.  I left the system for determining starting contacts blank to keep with the principle of "system agnostic", but the Vornheim method of 1 + Charisma points over 15 works, or I was thinking "1 + Charisma modifier (minimum 1)".  I really like the probability distribution of 2d6, and I wanted some results to be more likely than others so that players have some idea what talking to contacts is likely to net them, and I made it fairly likely overall that they hook you into further adventure material (either by rumors, new NPCs, or their own demands).  That being said, it's perhaps too unlikely that talking to a contact will get you the information you need.  That's why I ended up building in the "cumulative +1" clause when they direct you somewhere else, so that there can be an organic chain of discussions and clues, like the first 10 minutes of Law and Order.

For my first "district" I wrote up the city gates and lift chairs.  Since these are not real districts where people live, the full complement of district features is not there, but if anyone can think of an encounter or rumor, maybe I could make it work.

With all that said, here's Contacts and the City Gates and Lift Chairs after the break:


Contacts
Generally, rumors are something you pick up by chance.  When you seek out specific information, you use your contacts. The referee will decide the method for determining starting contacts, additional contacts can be gained through the natural course of play, and one additional contact can be added when leveling up inside the city. Rogues or other “streetwise” characters should gain an additional contact.  Each contact lives in a random district and knows more about what’s going on in his district than in others.

2: “Now why would you go and waste my time with something like this? Maybe you should be on your way.”
3-5: “Sorry, can’t help ya, but while I have you here, can you help me with something?”
6-8: “Don’t know anything about it, but I did hear. . .” Roll a random district rumor
9-11: “I don’t know, but you know who might. . .” - directs you to a new NPC in a random district.  Roll again on this table with a +1 (cumulative every time this is rolled for the same inquiry)
12: “You know, funny you should ask, I actually have heard something about that”