The Granularity of Megadungeons

Because I ought to be working on the spell list for the updated magic rules so that the new wizard character can actually do his thing, so of course I'm thinking about megadungeons instead. 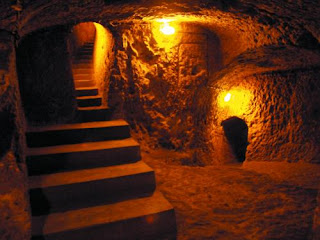 
So, we've got node-based megadungeon design and we've got various dungeon map generators, dating back to the 1st Edition DMG.  I think these two extremes of granularity (very little and very much respectively) are missing a sweet spot in a methodology for designing a megadungeon.

I made some faltering attempts at this back when I was starting up the Fellhold campaign a little more than a year ago.  Looking back at it just now, it's not as embarrassing as I was afraid it would be, but it's also not as useful as I thought at the time.  For one, I've never gotten around to posting the worksheets or sample tables I intended to make, but for another, it basically boils down to a step-by-step of what anybody who's been refereeing for a month or two has picked up about any dungeon creation, and treats megadungeons as just a lot of connected regular dungeons.

Most recently reading through Gus L's HMS Apollyon posts, though, has really crystallized for me the idea that megadungeons are not just many connected regular dungeons, nor one large normal dungeon, nor still a hex crawl that happens to be underground.  They occupy a weird in-between space that I think could still use some support.

So, here's what I'm thinking about diving into:

So, that's what I've got for right now. If all of this has been awesomely covered somewhere else, I'd love to hear it, as that would let me move on to my idea for a PvP D&D game of adventuring companies (think conquistadors and (East) India Company).
Posted by Jeff Russell