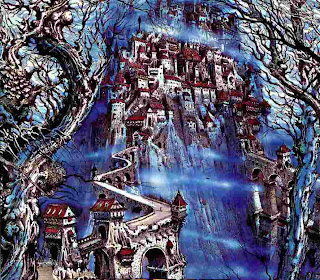 I'm going through the old Warhammer City: Middenheim supplement and awesoming it.  Before we dive in, let me explain how I got here.

So, a while back I was inspired to think about my campaign's big city Mickleheim (there's a lot of "heims" in this post, so buckle up) by Logan Knight's awesome Corpathium post and subsequently by the districts thereof: the Rookery and the Fogwalk.  I had already read and loved Vornheim, and seeing another good example of tools that are useful for running a city in play, I figured I better get on that. But I like to do research (which is a fancy word for "read other people's stuff to put off making your own") so I started with "Warhammer City: Middenheim".

Considering it's a first edition WFRP product, it's got a lot of solid gold weirdness and setting material (and tons of great art!).  Unfortunately, being a first edition WFRP product, it's also got a lot of extraneous details, some scripted adventure ideas, and a mixed bag of advice on running adventures in a city. I started reading it with the sole purpose of finding cool ideas or tools to use for Mickleheim, but I ended up deciding to try to make a fun, playable Middenheim thing as a sort of dry run in terms of what to include, how to present it and organize it, and so on.

In the process, I arrived at a few guiding principles to help sort through the material (because there is a lot of material in there for a ~100 page book).
For Part II, I'll put up an outline/table of contents.
Posted by Jeff Russell