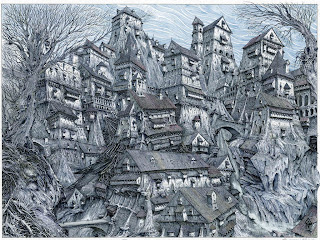 Today we have the general overview of Middenheim, some introductory notes on religion and the watch, a table of random shops, and some rumors about the Undercity.  Their will be more about religion and the Watch in the district and NPC sections, since I think they work better there.  I figure it will be more interesting to know that Ar-Ulric wants to father a dynasty than it is to know as part of the information about the cult of Ulric that the priesthood was sworn to celibacy ages ago and now some of them want to change it.  Likewise, the watch will get stuff like frequency of encounters and attitude to local denizens detailed in the district write-ups.

I feel like the Undercity rumors might be a bit sparse, but they're mostly drawn from the adventure ideas in the original book, and I feel like "how to do a megadungeon" is outside of the main scope of what's going on here.  I put the adventure hooks into rumor form so that individual GMs can decide how much is true and how much is exaggeration, depending on the level of Chaos driven corruption they want.  At any rate, the sections for this post are after the break:


Middenheim
The Watch
Religion
The Undercity

What Shop is This?