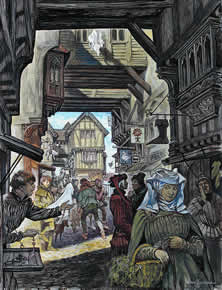 Okay, so this one is pretty brief due to a few real-life reasons, but my tentative goal is to keep up week-daily blogging and have this particular series wrapped up by the end of the year, and a pdf of it by the end of January.  Tentative. I've made too many blog-promises that have evaporated to want to be too concrete.

So, here is the table of contents/outline I've come up with for this Middenheim re-write, subject to change as I dig into stuff and realize it needs to be better organized:
Overall, my plan is less to present "Middenheim, as it "really" exists in a particular year", and more to present "how to use Middenheim to have *the sort* of adventures the original supplement talks about, but with more room to tailor to your own game and players.
Posted by Jeff Russell