So, more family stuff for Christmas day means little time to devote to writing up districts or Chaos Cult generators or the like, so I'm going to put up a little "year in review" post here as something quick.  I also figure it's best to put a post few are likely to read on a day few are likely to be checking blogs. 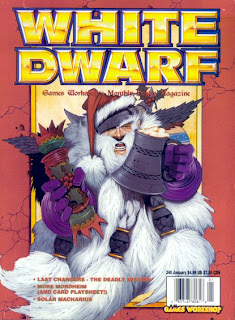 The Year in (Brief) Review

Personally, this year has been bookended by starting and finishing a job.  The job was immensely valuable for the experience, and I made a couple of good friends, but I'm happy to be moving on to starting a new job next month.  I've continued to work on graduate school, and I'll be finishing up this coming summer. My wife and I bought a house and moved in, and so far it seems pretty great.  Oh, and we got a couple of cats in February, and they've been nice to have around. I made my first civilian trans-continental trip, going to Singapore and Jakarta for school.

Gaming-wise Fellhold continued into this year, then we took a break and played "Planet of the Lost" for a few months, and now we're back to Fellhold with a bevy of new house rules.  I've been pleased and amazed that the group of friends I got together has continued to meet online almost every Monday night for a few hours, and the fact that we started a new game with a new GM shows that it's not even just about me or my game, which is cool. Fellhold went from being an experiment in running OD&D and addressing things as they came up in play to being a game run along old school principles with rules designed to do what I consciously wanted them to do.

Blog-wise, you can see that I was pretty deficient.  The blogging year started in April, skipped August-October, lightly brushed November, and came back in December with full force.  Since my shift to a focus on Older/DIY D&D, I've struggled a bit to find the right tone and types of posts.  I think that actual play reports are not worthwhile, even as a record for me.  Instead, I'm going to focus on rules and setting material, and especially their interaction.  I've got a few projects in mind that will hopefully fill out the blog some even when there's not much going on with Fellhold.  And I'm going to be wrapping up this Middenheim series within the next week or two, which has been fun and garnered a fair amount of interest.

At any rate, I've got a lot to be thankful for, and a lot to look forward to.  Hope everyone's had a good year, and may your new one be happy.