Vornheiming Middenheim Part V: The Powers that Be 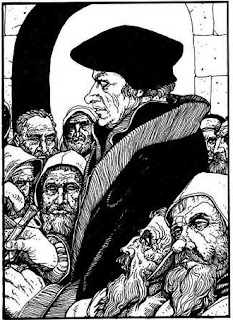 So, it ended up taking me a little longer than I expected to get the "Powers that Be" table set up.  Turns out that it's pretty tough to satisfyingly emulate the innovation to have each entry show a relationship with the next entry from  Zak S.'s Vornheim Aristocrats table.  As it is, I ended up with only 25 entries.  This should probably be chopped down to 20 or increased to 30, so that it corresponds to an actual die.

For those unfamiliar with Zak's table, the idea is that you can randomly pick an aristocrat/powerful person by rolling once, and he or she will have all of the traits from left to right, with the relationship indicated by the last entry with the next person on the table.  I've built this so that it can act as a quick reference or relationship map if you want to play Middenheim "by the book", or you can randomize new aristocrats by rolling once for each column and getting totally new NPCs.

So, for example, say you roll a 15 and you're doing it the simple way.  You get Janna Eberhauer, Deputy High Wizard, an intelligent and friendly wizard with freckles.  She terrifies Josef Sparsam the Chancellor.  Or, if you want to go the complicated route, you could roll a 6, 10, 11, 15, 16, 7, 25, which gives you the following: Petra (no last name), the Midden Marshal, who has freckles and is an enthusiastic collector of antique art.  She is a lover of Baron Stefan Todbringer.

If you want to get really complex, repeat a few times rather than having the "relationship to" column point to a fully developed "book" NPC.

I'd say that if I were writing an adventure, rather than creating a toolkit, I'd take about this level of information and put it into a visual relationship map, and I'd add in a few more of the plots given in Warhammer City and in "Power Behind the Throne" to suggest ways for PCs to get involved.  As it is, I'm hoping that the intrigue generator will do most of the heavy lifting, and I'm going to parse the stuff in the supplement and adventure for material to put in that.