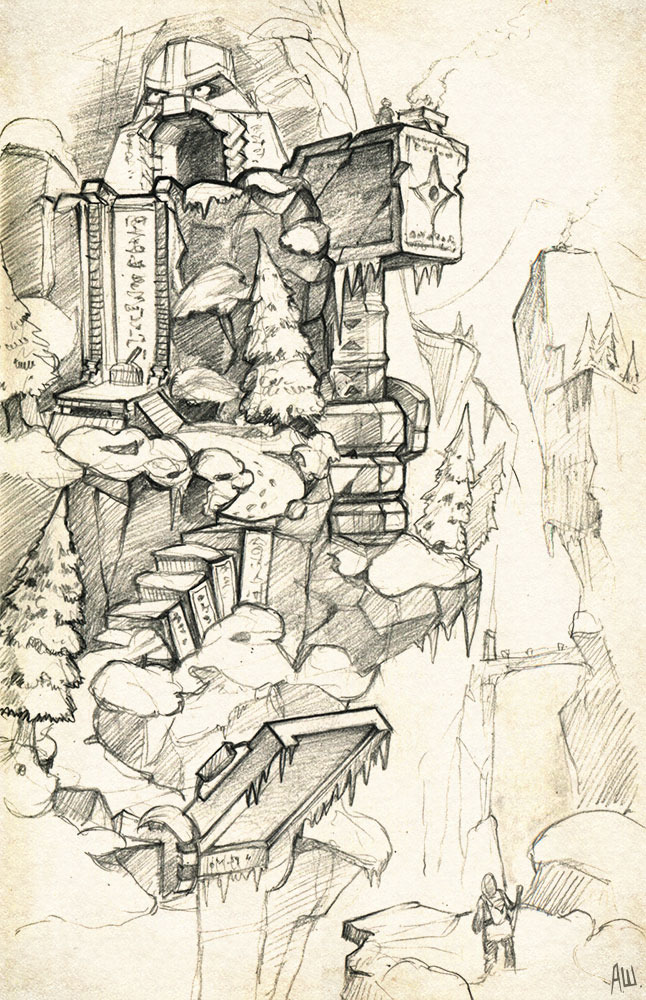 So, a combination of a Google+ post about Dwarves being like the Sumerians (that unfortunately I cannot find to properly attribute) and Ben L.'s post on Textual Corruptions has me thinking about dwarves in Fellhold.  Specifically, it has come up a lot that the Dwarf character's loosely defined familiarity with Dwarven culture has given him all sorts of benefits in the part of the dungeon built by the dwarves.  Well, I've thought of a great way to get around that.

So, the Dwarves were the first civilized people.  They invented most of the ways of civilization, including magic.  Hrokr, the Crow Father, was the patron deity of the minor tribes of men beginning to encroach on dwarven land.  He tricked the dwarves into confining magic into runes, that man might more easily learn it, but eventually men learned the magic behind runes, while dwarves forgot.

Basically, Dwarves are to the setting as Sumerians were to the near east: the source of ancient, barely understood knowledge, highly organized, crafting order out of Chaos, semi-mythical, all that good stuff.  But supplanted, replaced in real secular power terms.  All writing is based on dwarvish writing.  Old, high mannish is actually debased dwarvish.  Engineering, carving, art, are all derivative of Dwarven styles.  In the terms of my setting, the ancient dwarves were the proto-Germanic (maybe even proto-Indo-European) types to the humans' northern germanic-ness.

So, modern dwarves remember little of the glory days.  It's like asking a Babylonian about an early Sumerian, or a Danish viking about the distant ancestors of the Germanians who fought the Romans.  There is almost as much cultural similarity for learned humans to spot as there is for a common dwarf.

Now, rules-wise, I want to incorporate some textual corruption type rules like in the post above, but into archaeological features or murals.  I want there to be a way that seemingly obvious interpretations of ancient and esoteric carvings/statues/art are actually way off the mark, maybe even dangerously so.  The easiest way would be with inscriptions, or an elaborate method of recording like the story-walls in Hammers of the God, but I'm trying to come up with something more interesting.  Maybe I can incorporate it into an elaborate set of puzzle rooms and the mechanical workings thereof.  I'll have to figure it out.  But mostly I wanted to start firming up some ideas about the dwarves as the cultural font for all of the known campaign world.
Posted by Jeff Russell