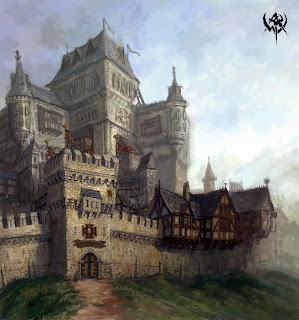 Okay, so I'm trying to hammer out the district write-ups and not drag this thing out too much past the original target of a few days ago. I'm afraid that the "Locations" entries are getting a little too much into "stuff to look up" territory. Right now I figure I will leave them in there to fulfill the secondary goal of making this a useful reference for running the city "as intended", though I do take some liberties with the encounters and rumors as I present them.

I'm also noodling around with a further addition to the contacts system presented earlier. It might be complexity for the sake of cute mechanics, though. Basically, I really like that contacts in different districts get you different information. I've started trying to think how to have "juicier" rumors be more accessible from "better" contacts. Something like a contact rank that modifies their likelihood to know what you're asking if you're in the right district, or ordering the rumors so that ones that only some people would be privy to are higher numbers, and you add the rank when you roll on the rumor table.

But I think that that goes against the main spirit of what I'm trying to do here. For one, keeping secrets based more on dice rolls than on player ingenuity isn't very cool, it's better to supply information that leads to interesting situations than it is to try to create lame mysteries and reveals. Secondly, I've intentionally been playing fast and loose with what I put in the rumors and presenting them all with the same lack of confirmation of veracity, whether it's "officially true" or not. I think that ordering the rumors would be counter to that, and I really like the efficiency of presenting interesting and/or weird stuff as potentially but unreliably true. So, at this point, it looks like I've talked myself out of that new contacts idea for now, but maybe consider it shelved for a specifically conspiracy/detectivey game.

I have also included a quick system for resolving trials. The original book has a pretty involved subsystem chock full of modifiers and specific charges and severity ratings and mitigating factors and so forth. I liked the concept of an "off-screen" way to handle trials, but I wanted to streamline it some. So I took out most of the specific modifiers, gave some guidelines on applying your own, and converted it to a 3d6 system for some sweet, sweet bell curve action. Also, I have an irrational distaste for the eminently reasonable percentile system. The system is weighted more towards lots of bribery and heavy penalties to encourage player action in the form of bribes and breakout attempts. If you're more looking for a simple "you're fined for pickpocketing" result, you should probably just make that call and move on. If you want high-participation trials, I recommend Vornheim.


4. Grafsmund-Nordgarten
Activity
Day
Night
Locations
Encounters
No random encounters in the day. 1 in 6 chance per hour at night
Rumors


Below is a process for handling the trial of a character arrested or otherwise suspected of a crime.  The emphasis is on simplicity and ease of use, but feel free to add in modifiers for other factors, such as the social class of perpetrator and victim, hiring a lawyer, or others. It is recommended that whether characters are caught and arrested, and by whom, be handled through the normal course of play, and then bring these rules into play once they are held.
Posted by Jeff Russell