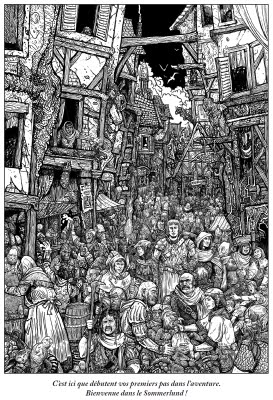 Okay, I'm really excited about this one, even if it's a pretty short post.  Small But Vicious Dog really inspired me on how to take the "Warhammerness" of Middenheim to 11.  I said near the beginning of this project that I felt like Middenheim was too generic, too "nice" for what I have in mind when I think about the Old World.  Yes, I know that the view of Warhammer as being syphilitic and knee-deep in shit is exaggerated.  But that's part of what makes WFRP different from D&D for me, and part of what's appealing about the setting.  SBVD also takes this view and does a fantastic job with it.  The people are especially described as largely nasty and self-serving, so I've made an NPC generator to convey this feeling.

So, the results of this table skew towards grotty and nasty.  If you just want a generically pleasant shopkeeper or gruff but honest watchman, then there you have it: don't bother with the generator.  You'll also notice that this generator only creates humans.  I figure elves, dwarves, and halflings are all rare and/or stereotypical enough to either be cast to type or purposeful inversions of those stereotypes.  Or you can make yourself some demi-human generators.  I've also not included careers here because a) I wanted to make a table I can use with my shiny new pop-o-matic, and there's only so many dice in there, b) I figure it will be more common to want to figure out details about someone with some context already established ("Who is this shopkeeper really?"), and c) SBVD or WFRP already have methods of random career generation.  That being said, I may make a d20 chart for Middenheim specific careers. I also considered some name tables, but then I found this site.

Obviously this chart owes a lot to Logan Knight's NPC Birthing sacs, which are probably more generically useful than this one (it's also automated here).  His doubles and triples tables also give some fantastic more esoteric stuff.  I figure you can roll all at once to get the inspiration for a full formed guy or gal like Logan's tables are intended to be used, or you can roll selectively as stuff becomes important to flesh out established people.  I'm going to make a relationship generator too so that complex relationship maps/social situations that aren't necessarily intrigues can be created easily on the fly (which will probably owe a lot to this post at "Really Bad Eggs", which Michael Julius was kind enough to point out to me in response to my last post) .

Of course, I've got to give it a couple of test runs:

First up: 1, 6, 4, 8, 10, 20 (Middenheimer, Old Female, Haughtily, Crazed, Viciousness, Gourmet Palate)
Kune Herbarter: An old Middenheimer woman from a good family who enjoys fine meals made of poor people.  Her haughtily manic behavior is interpreted as a form of dementia, but she is actually just a mean old cuss.

Neat!  Try 2:
3, 2, 4, 4, 6, 15 (Other Imperial, Young Male, Haughtily, Unremarkable, Social Rank, Fanatical)
Setanta Kahl: A young man from a farming village somewhere outside of Middenland who adopts the most stereotypical fashions and affectations of the upperclasses in his fanatical drive to achieve a higher station in life.

I'd say it works like a charm so far!
Posted by Jeff Russell