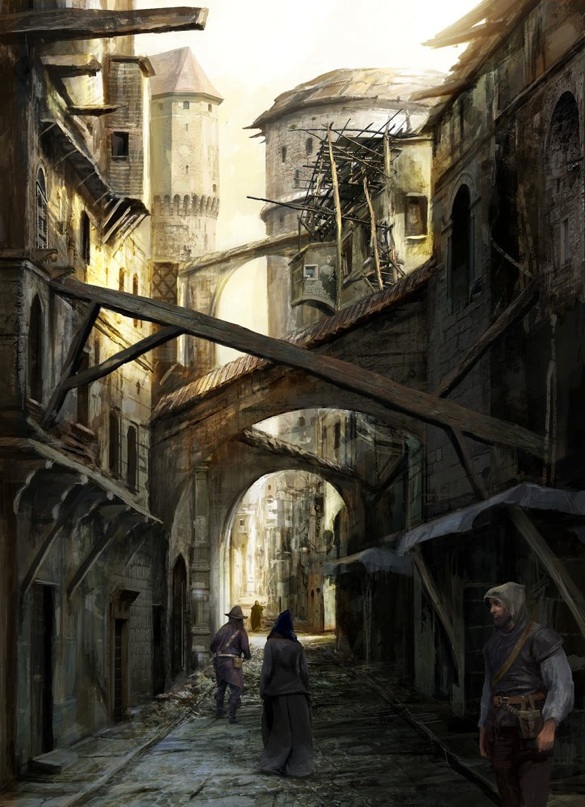 So, today I've continued the "bite-sized" district write-ups, and I gotta say, I'm enjoying them quite a bit.  Thinking up encounters that would be interesting but would make sense to happen somewhat often and were different for every district was starting to not be a lot of fun.  Neither was writing location descriptions.  But rumors are tons of fun!  I am really digging how well they convey the flavor of each district, and I continue to like the idea that they give GMs flexibility in deciding what's the truth in their game while still presenting readily gamable ideas (I hope). With 12 districts, that's 144 potential adventure hooks (sure, many are closely related, but still distinct).

These particular districts were fun, because they are the two slummiest slums in Middenheim.  Lots of juicy crime boss and red light district stuff going on here.  I feel like maybe I'm not doing enough to make explicit the stuff that this late 80's product was coyly hinting at.  Not to be salacious just for the kicks, but because I think vivid references to sex, drugs, and crime presents more opportunities for stuff to grab the interest of the players.  I do have to give the original a lot of credit for including a lot of explicit stuff on drugs (including one that is obviously cocaine) and a lot of implicit stuff about sex. AD&D would never have included this sort of stuff at this point (as far as I know). Chalk it up to cultural differences, I suppose.

Write up these slums has also gotten me thinking about alley, roof, and sewer crawling.  Logan Knight just did a rockin sweet post on that very topic, and if I don't do a version of my own, I'll likely say "go use that" for such things.  One of the best parts is that no strict map is created, and everything remains fairly loose geographically.  That matched up nicely with a thought I was having looking at the (lovely) maps from the original supplement: Middenheim looks too finite.  Now, sure, it's probably already way too huge for a late medieval/early Renaissance city, especially one in the middle of a giant forest, but that's not the point.  It's mapped in a way that anal-retentive players could, say, make it a point to visit every single building in a district.  I don't think that's very cool from a play standpoint, or in evoking a big, weird, twisty city.  So I think I'm going to make a new map that shows the districts as big chunks, with only the major streets (which mostly are the borders to the districts anyway) labeled.  I figure if someone wants a more detailed map, they can find it the same way I have (Google), or if they want to leave things up in the air and use more grungy "crawling" rules, they can.

One thing I've been leaving out that came up in today's district write-ups is snotball, because I just can't bring myself to put it in there.  It's just too silly.  Maybe it's the fact that I'm a damn yank and soccer is already perplexing enough to me, but soccer with a snotling tied into a ball? I have always enjoyed the bizarre, goofy, and dark humor in Warhammer, and there's loads of it reading through Warhammer City, but for some reason, the more extreme forms of it just work better for me in the tabletop wargame context than in the RPG context (though I've slipped a bit of my own silliness in here and there).  If you can't live without it, I imagine you don't need my help in making that happen.

At any rate, the actual write-ups are below the break: