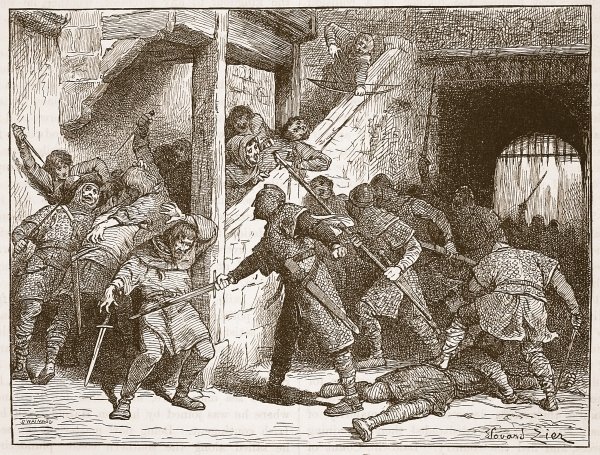 Okay, so not really a mystery so much as an adventure, but I'm a sucker for situational use of song lyrics.  In this post I'm going to run through using some of the Middenheim tools to make an adventure.  As a proof of concept, I'm going to try to run through this "by the numbers" as much as possible, and limit my editorial changes.  Follow along after the break.


So, to get the shape of what we're trying to figure out here, I'm going to create an intrigue and a job.  Hopefully these will find a way to get connected as we go.  First up, the job, using the 4d20 complex job generator:

Okay! Promising already.  Now let's look at why the friend wants to frame the wizard using the intrigue generator.  To start tying things together, I'm going to put "the friend" and "the wizard" in columns 1 and 3, but I'm going to take it all the way out to "extra complex" to get as juicy as possible. So, that gets us:
Roll: (chosen), 11, (chosen), 7, 11, (district 10, rumor 6)
Results: The friend wants cooperation from the wizard because of a lack of connections that he blames on the Komission for Health, Education, and Welfare, because the Komission is secretly behind the Windhund Haulage Company being used as a front for smuggling in the Wynd.

So, it's starting to look like our friend is planning to frame the wizard in order to blackmail him into cooperating in getting the friend more connections.  For some reason, the Komission for Health, Education, and Welfare and its use of the Windhund Haulage company as a front for smuggling operations is preventing him from doing so.  I've got some ideas here involving drug running and government officials making money on the side, but let's flesh out our two principle NPCs first and see if their backgrounds or characteristics suggest anything:

"The Friend" - Kaspar
Roll: 1, 3, 2, 1, 5, 14
Middenheimer male who is sarcastically beshitten and is motivated by fame and who has noticeable scars.

Because that gives me a pretty good picture, but doesn't quite finish it, let's bust out the career table and find out that Kaspar is a:

Obviously his occupation is wizard, so let's go with that.

Okay, now Kaspar being a scholar is interesting given the person he wants to frame is a wizard.  Sounds like Kaspar is studying to be a wizard but he can't get the mentors he needs to advance, and he blames it on the Komission shutting down his wretched little apartment workshop for being disgustingly beshitten.  He doesn't pay attention to that stuff and assumes the health violation is actually an excuse because of some nefarious activity on the Komission's part.  I don't think he knows that they run the Smuggling operation, I'm going to interpret the intrigue roll as if that's the truth of the matter but he doesn't know it.

Jodocus popped out of the generator almost a perfect cliche of a wizard to be blackmailed.  Old, haughty, hard-working, dresses fancy and wants power.  Well, I for one am okay with a little bit of cliche to anchor all of the convoluted business we're trying to come up with here.

Next I want to generate the relationship maps for each of these guys.  I'm going to treat each one as "central" and build a web from there.  Now, I expect most people in these webs to be relatively minor, maybe the sorts of people who become contacts as the player characters ask around, but I'm kind of "fishing" for something inspiring here.  If there's an unexpected connection between Kaspar and Jodocus, or if one of the people in the web is a Chaos Cultist or noble, then we'll work from there.  If not, then I'll bust out the Powers that Be generator to come up with someone interesting from the Komission and figure out their motivation towards Kaspar.  Worst case scenario, the smuggling is the work of either a crime ring or a chaos cult, and either way there's an excuse for breaking and entering and/or armed belligerence.

My next step was to start making the relationship map.  I got into it, and the result was, well, overly complex.  It's now getting late and doing the whole new relationship map is going to take a bit of time, so I'm going to save that for the next post.
Posted by Jeff Russell